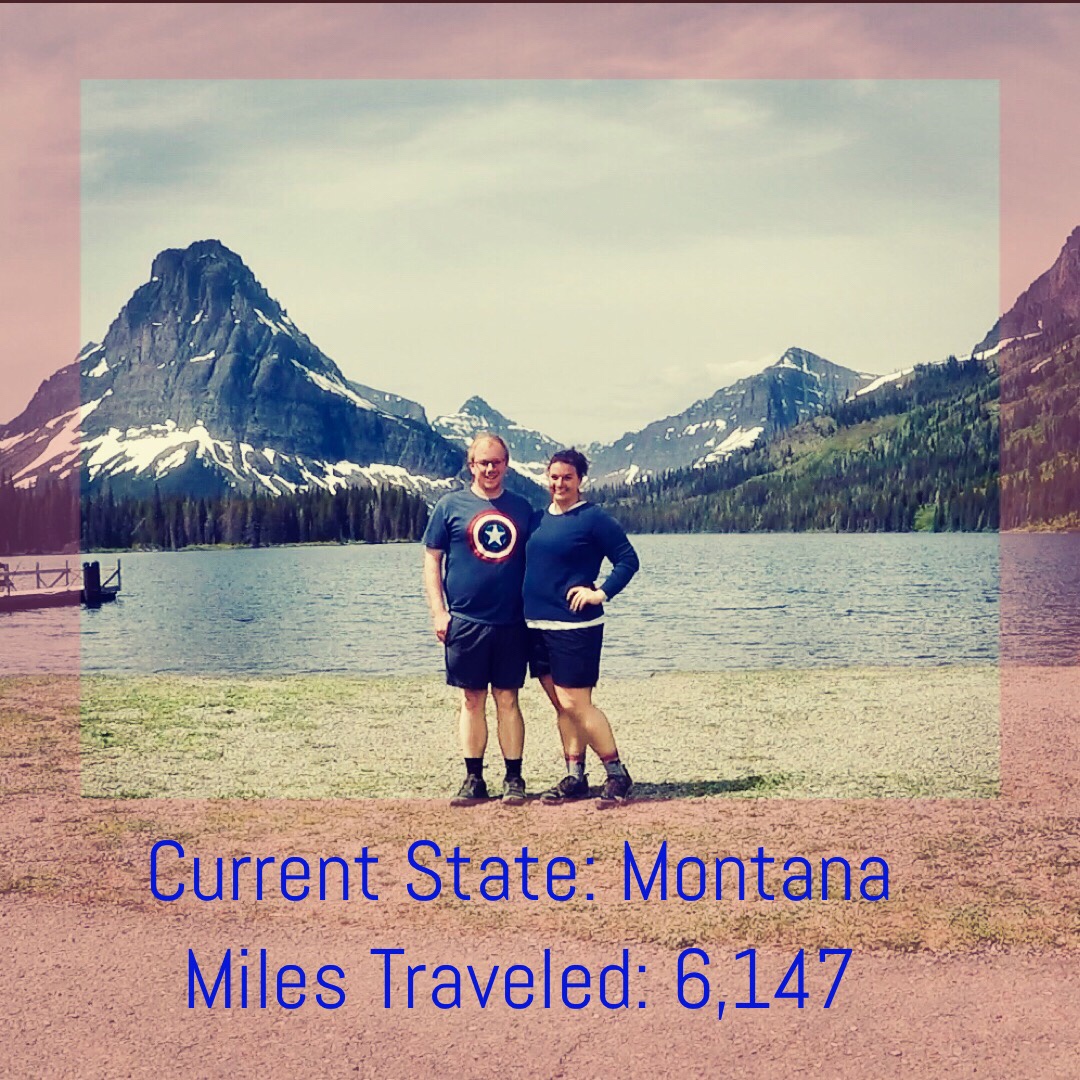 After a couple small hikes and being followed by a pack of mountain goats we traveled 456 miles off to Billings, MT passing thousands of cows, sheep, pronghorns, and windmills.

We were in no rush this morning as we knew the hikes we were setting out for were short and more than half of the day would be for travel.

This was a different section of the park than we had been to, and again had to drive around the park. 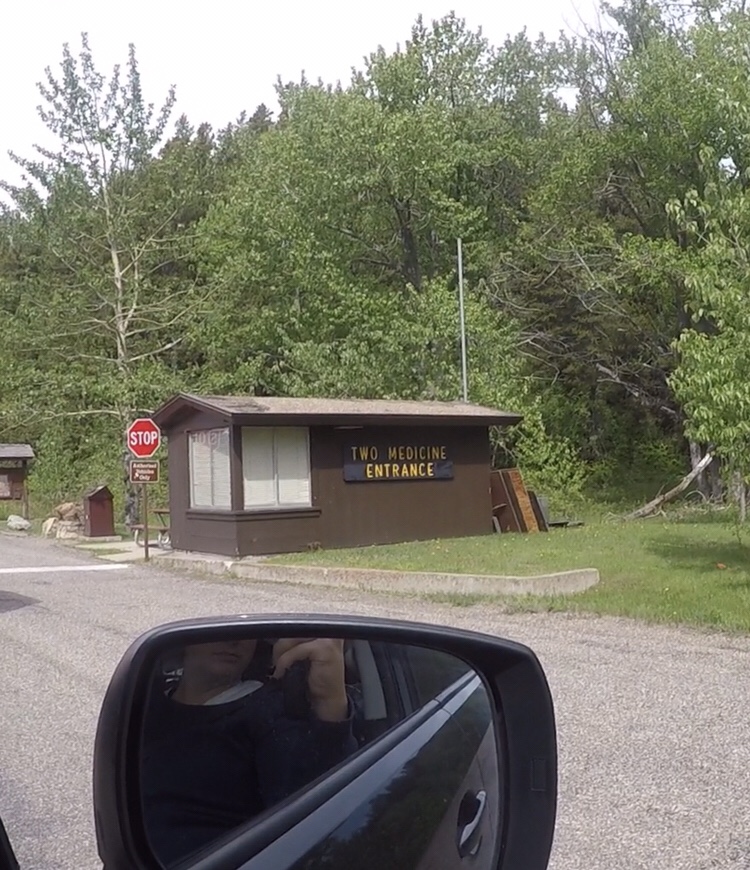 Two Medicine does not have a visitors center, just a one person entrance and ranger station.

The ranger we talked to our first day here gave us a couple recommendations for hikes so we set out to do those. We first stopped at the general store.

We have met some pretty awesome people on this trip and have heard a lot about people’s lives and what brought them here. We are fascinated by some people’s stores and intrigued by the people who spend their summers in national parks and work different jobs in different parks each summer. It’s definitely in the back of our minds.

Anyway, in this store we met Shannon who used to own a house in Kingston, NH (right next to where I grew up). She was SO nice and we had a good 20 min conversation with her about New Hampshire, superheroes, life, our wedding, etc. The more we travel and talk to people the world just keeps getting smaller and smaller.

Chris had talked to another woman in the store who has warned him about a pack of mountain goats on the Scenic Point trail we were about to do. He was pumped as he set out to see one of these guys today. She warned us that there is one male who does not like it when people pass and gets visibly agitated. 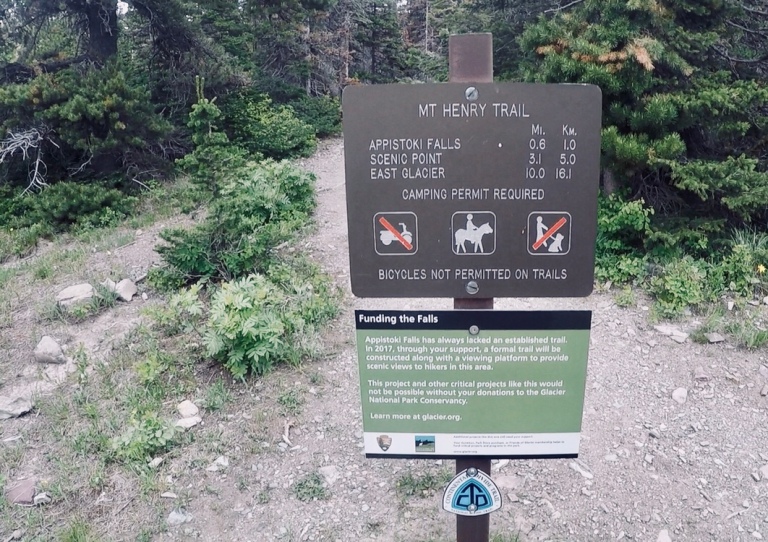 Off we went.. about half a mile in I saw some movement ahead, so started making noise just in case it was a bear. This goat wraps his head around the tree and stares us down (it’s on our GoPro video) – we were dying laughing. 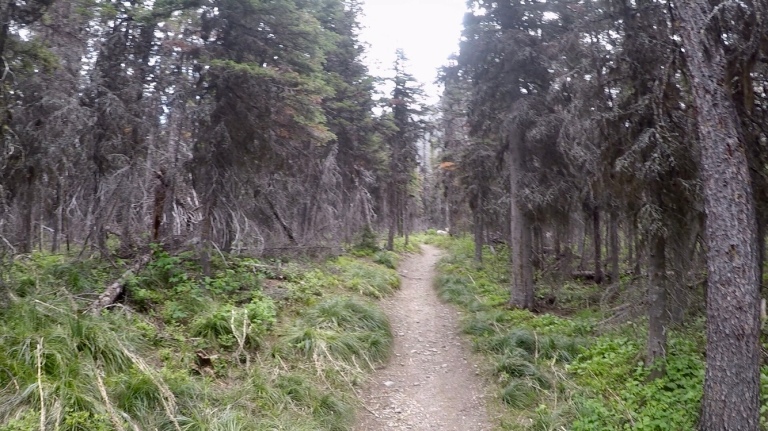 It’s hard to see in this picture. 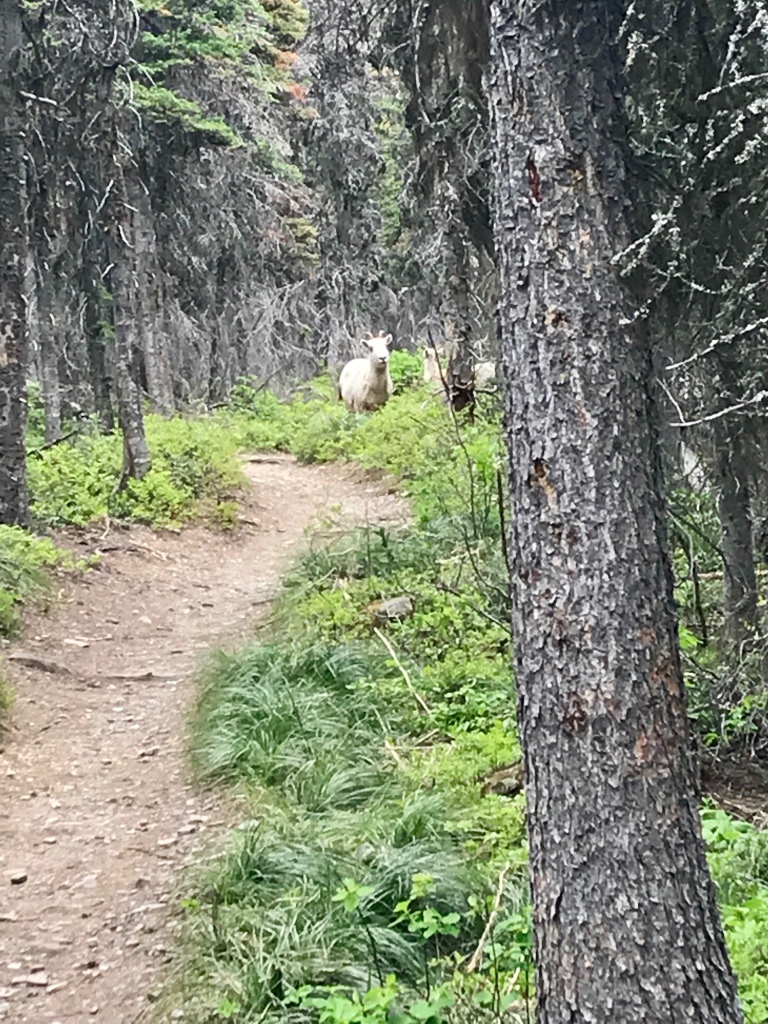 And the goat starts moving towards him. Soooooo we stalled to see what they would do and if we should move forward.. and they continue to stare at us and walk towards us.

At this point I can’t stop laughing. Mostly because I laugh when I’m nervous and because this lead goat had a whole lot of personality.

Their eye contact was not breaking and one just kept coming slowly closer so we (I) decided to turn around. As we do the pack is slowly heading our way as well. Then Chris thinks he’s funny and tells me to hurry up saying they are getting faster (they weren’t). 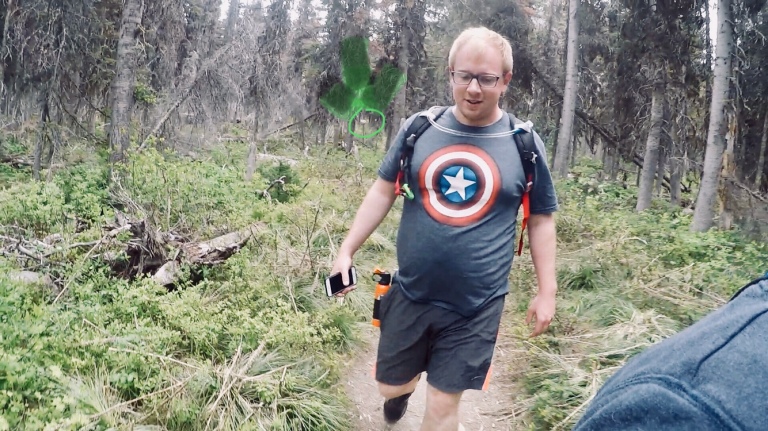 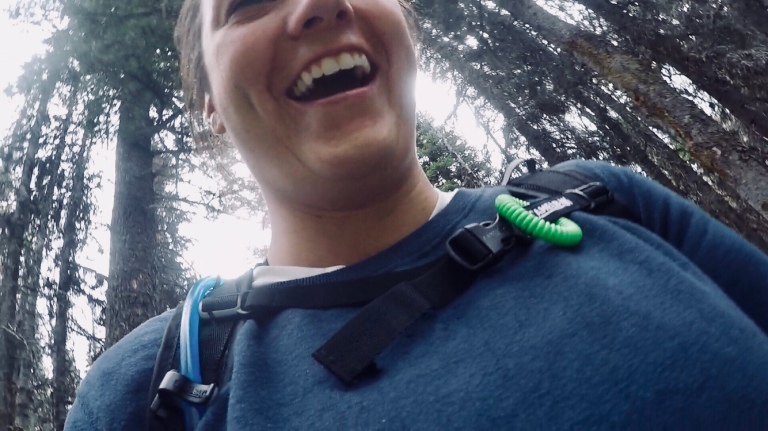 We got back to the car and looked for another trail to take and LOOK WHO COMES OUT OF THE WOODS. 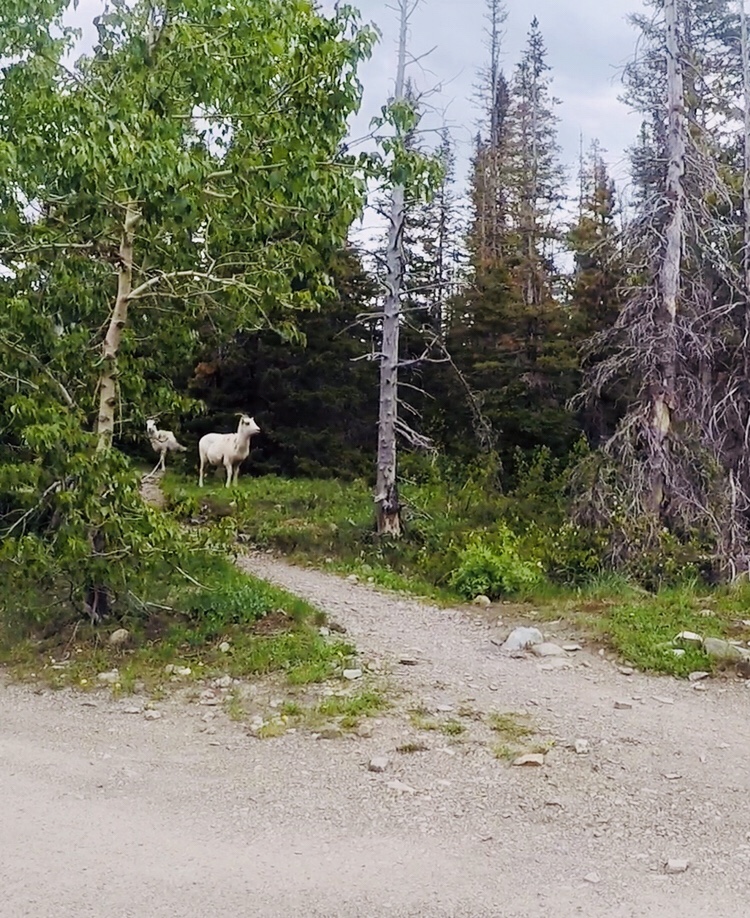 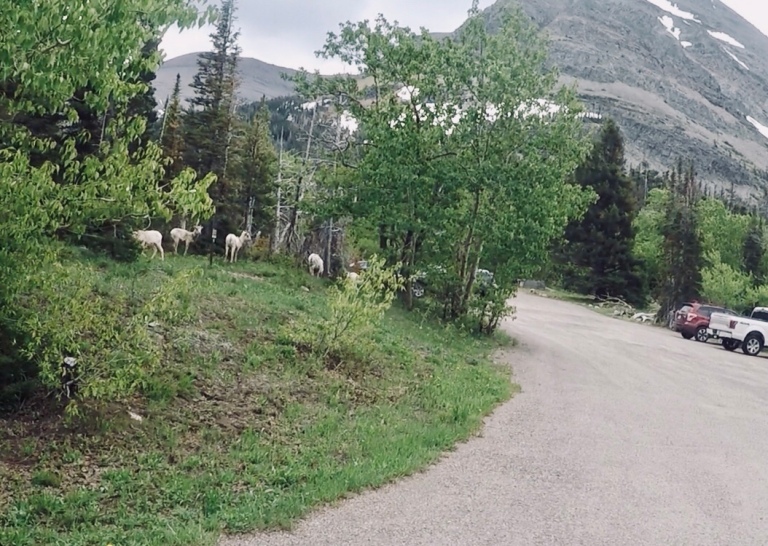 I TOLD CHRIS THEY WERE FOLLOWING US.

So, if you are ever in Glacier and take the Scenic Point trail. Watch out for these guys. The lead male really does not like people. He is in the first of these three pics.

Off we went to a new trailhead. 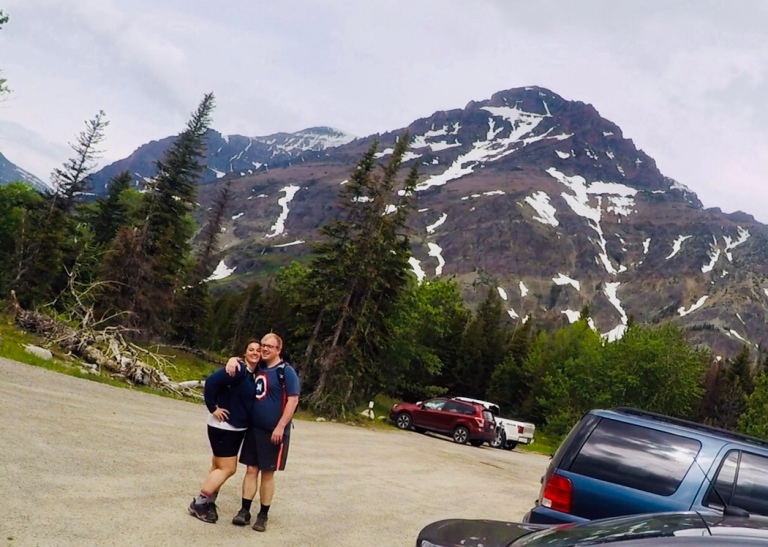 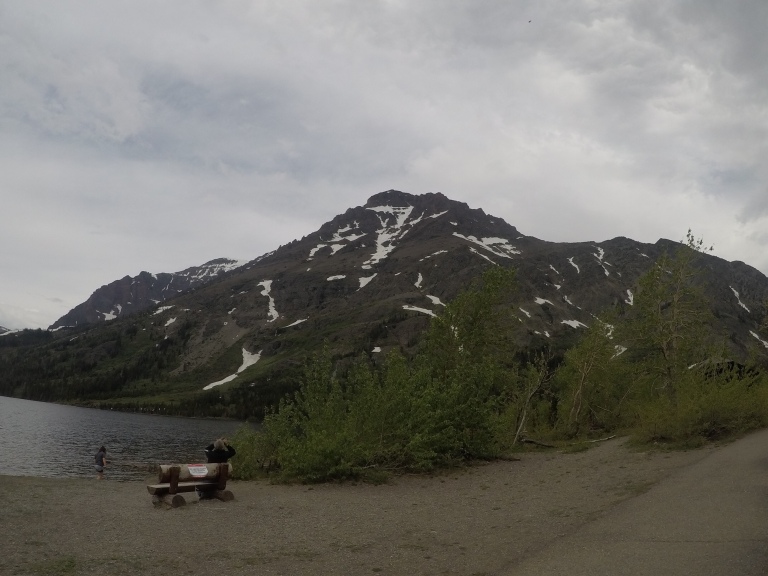 Along this trail we met a family of 6 who sold their house 9 months ago and have lived in the road ever since. This summer the husband has a job at the park so they’ll be spending the whole summer here. They were super nice and gave us a few of their favorite spots. The oldest boy did rodeo, they were awesome to talk to.

The trail was VERY woody. 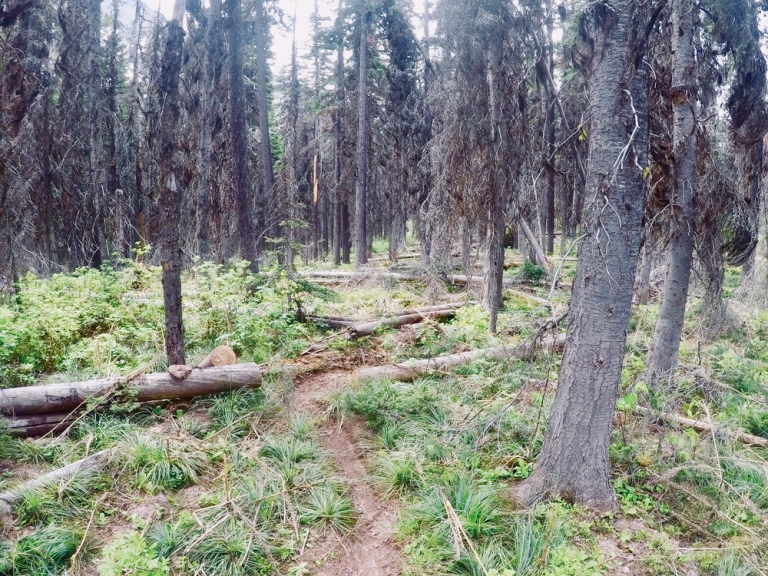 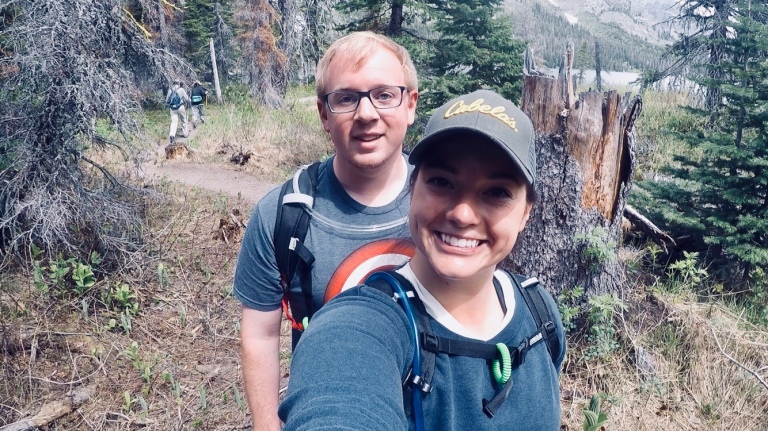 I stopped and looked at this tree below for a few minutes.. it was so interesting to me. I was, and still am, fascinated by it; we have seen a few similar but not like this one. 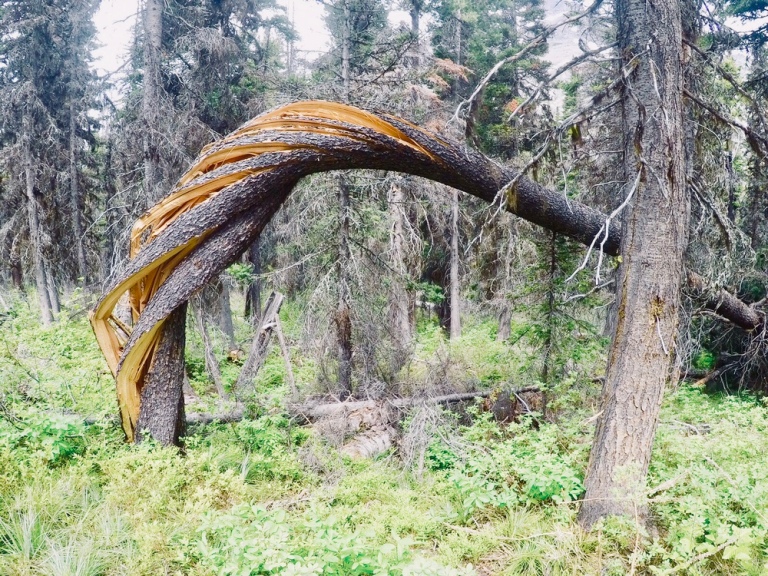 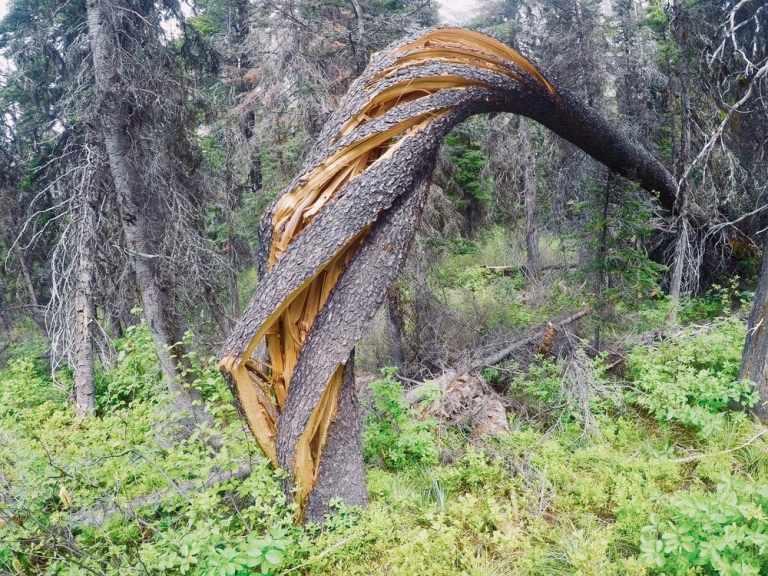 We moved on. Eventually the woods opened up and we made it to “paradise point”. 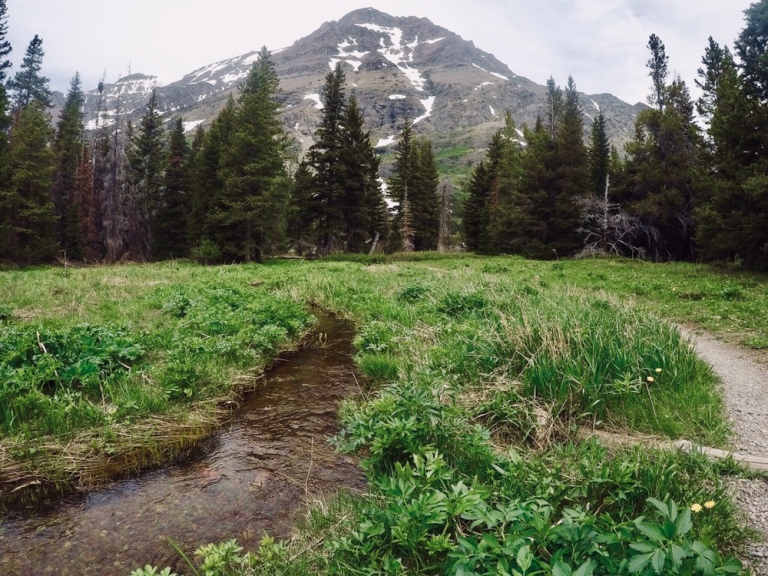 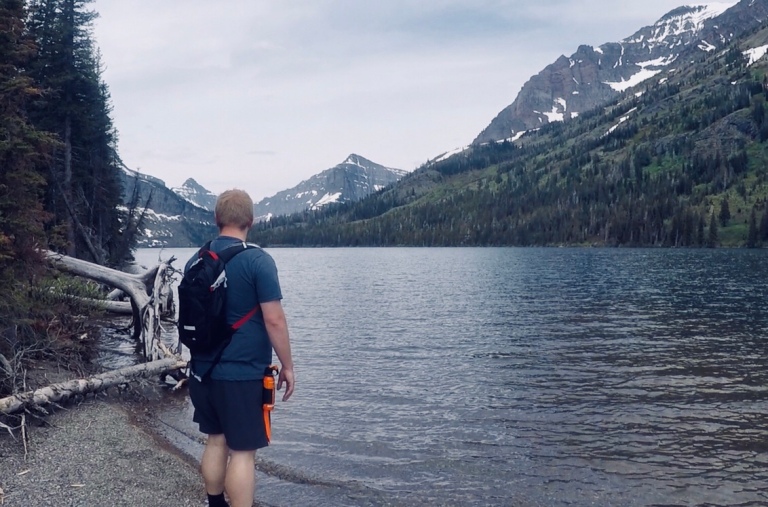 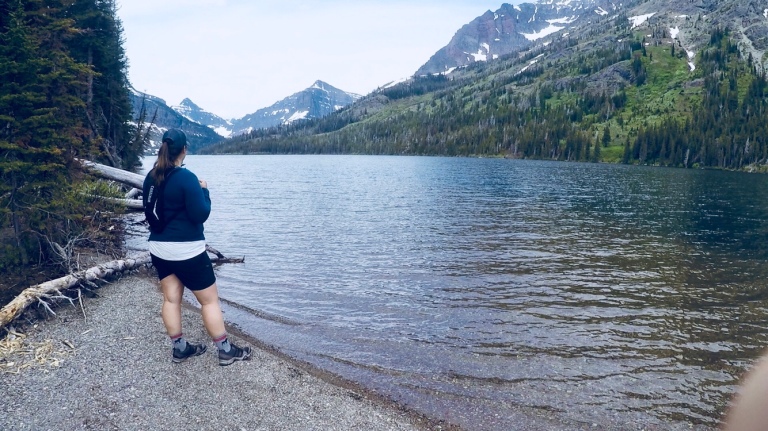 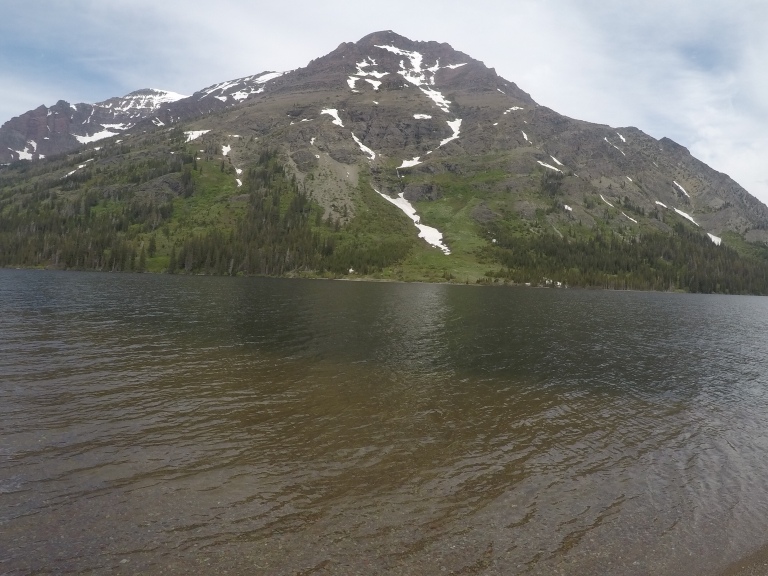 As we were walking back a family asked us “was the grizzly still up there”. Awesome. We didn’t see it, but we were glad to be heading in the opposite direction.

Even tho I wore my moose socks today, I still have yet to see a Bull Moose. 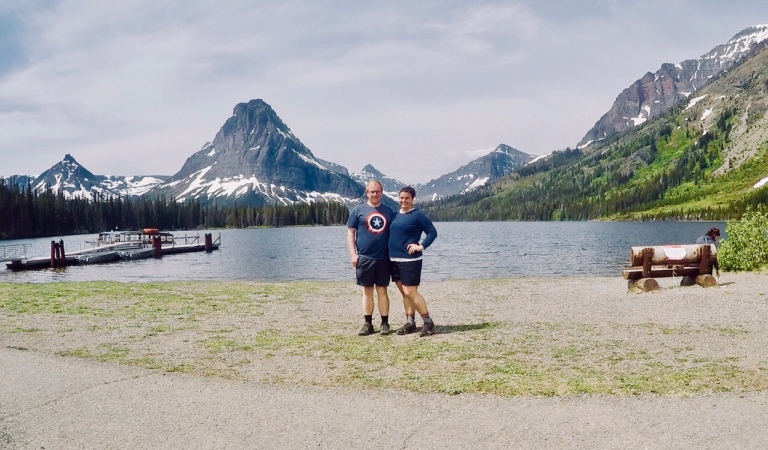 Glacier was certainly an adventure and entertained with lots of close brushes with wildlife.

We hit the road for Billings. Miles and miles of farm land, cows, sheep, and tons off energy windmills. 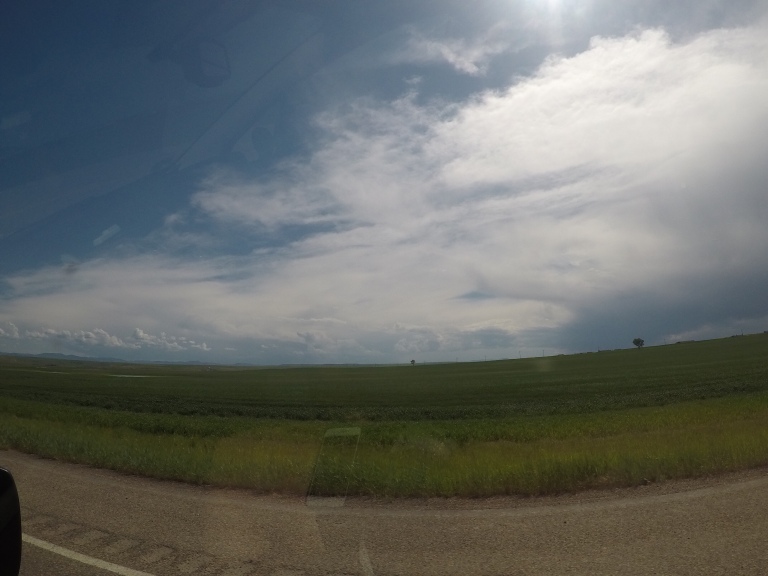 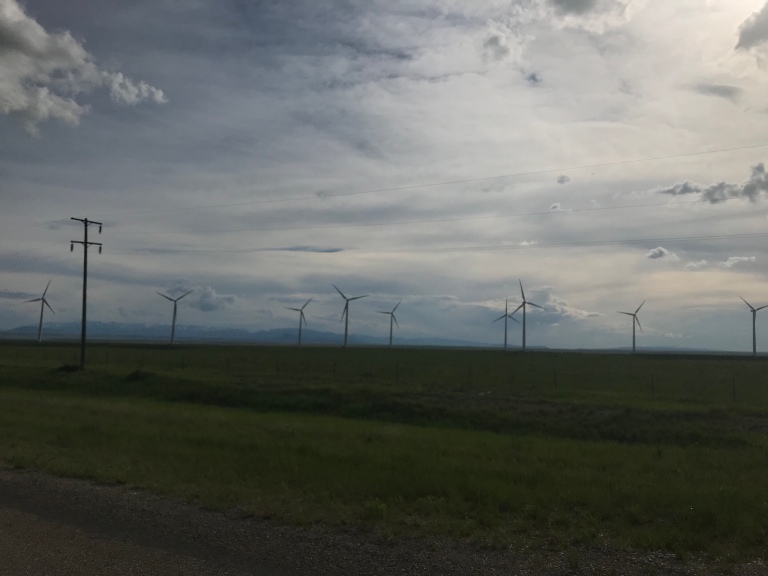 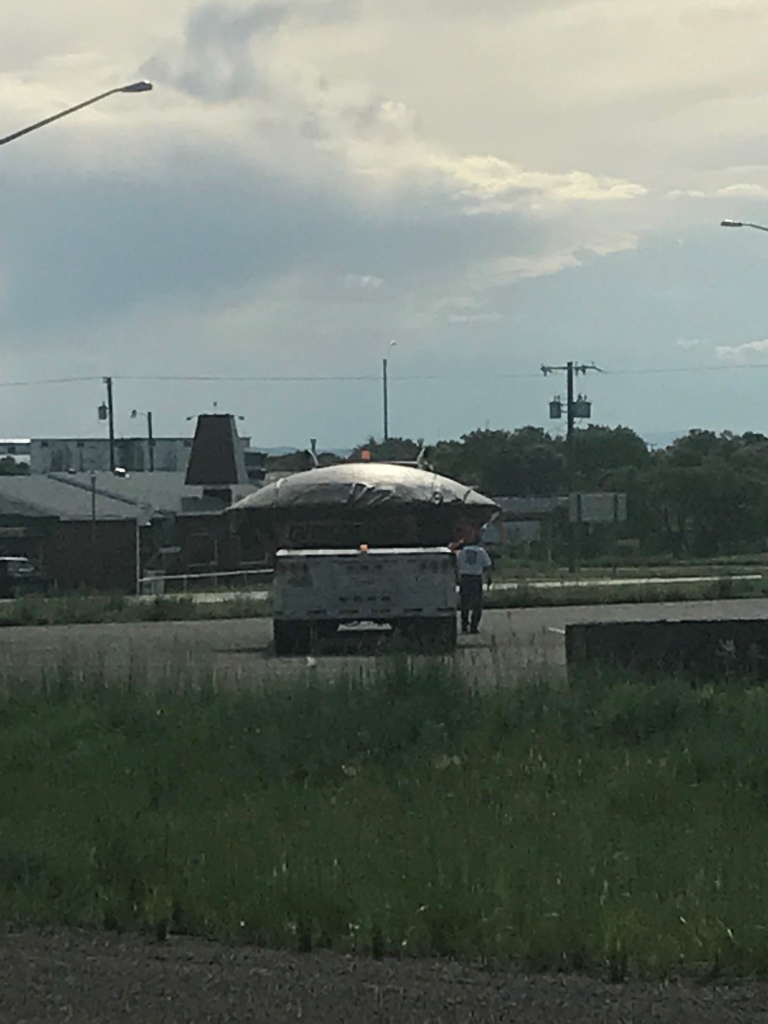 Approaching Billings really was a site to see, the city is well below the highway nestled between multiple mountain ranges – and really hard to get a picture showing that. 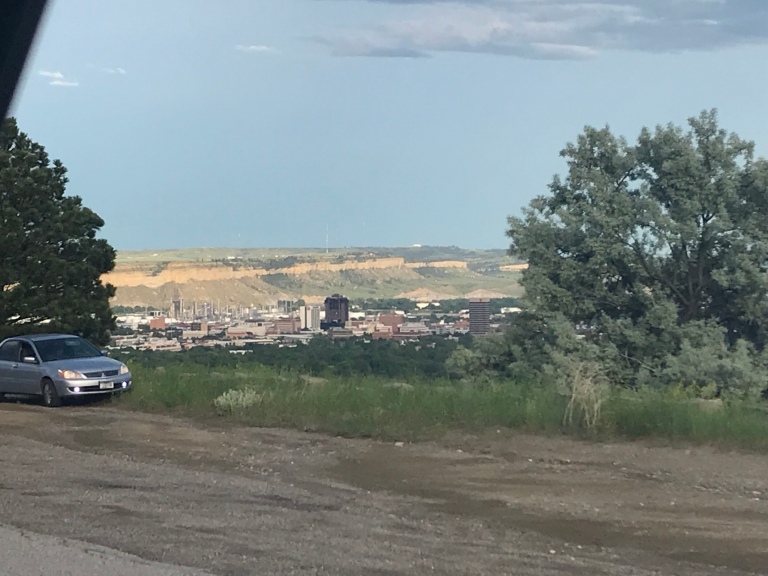 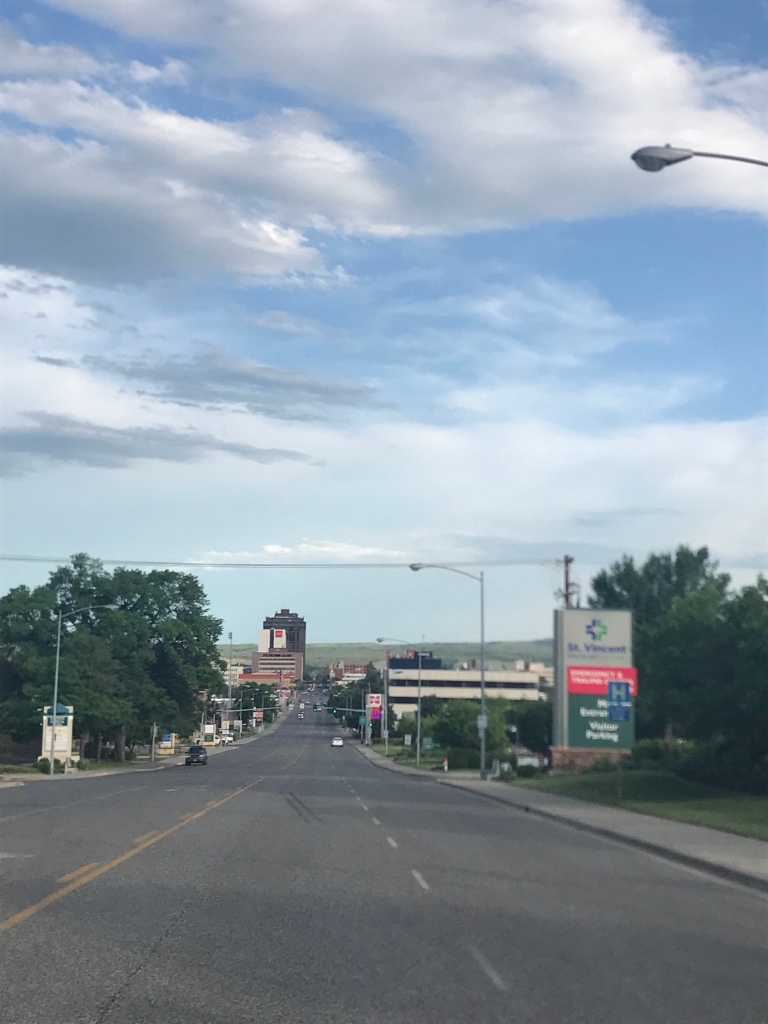 Dinner was a Mexican restaurant right next to our hotel. The menu was very unique with a variety of different creations. Don Luis in Billings Montana, check it out for sure. 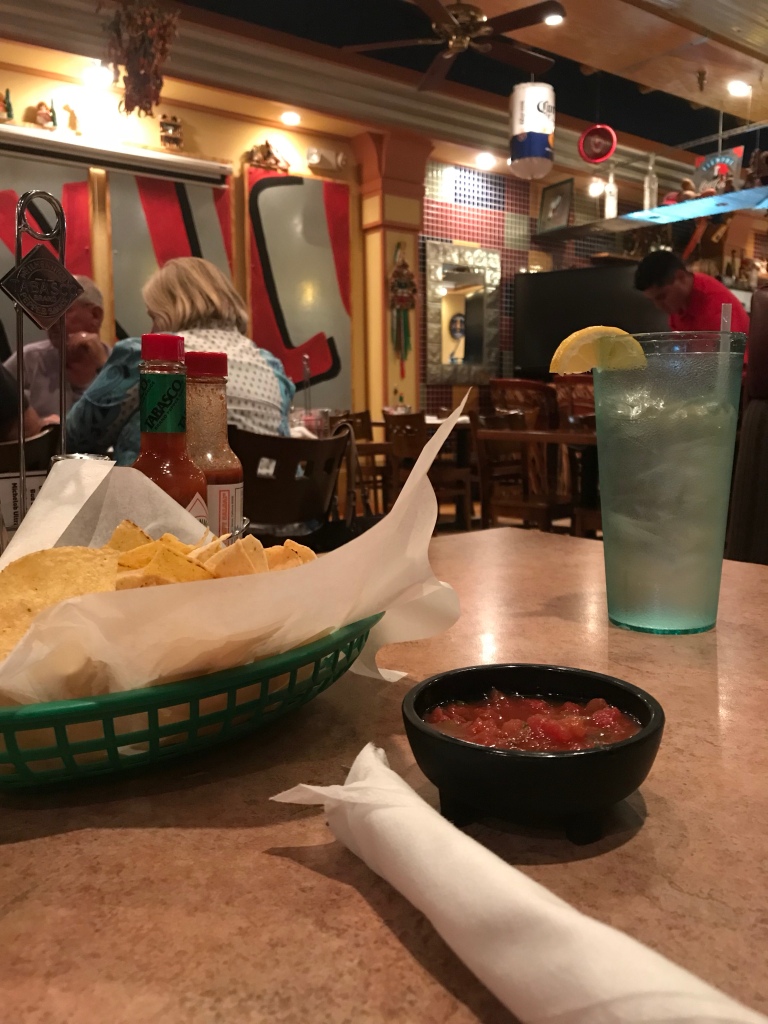 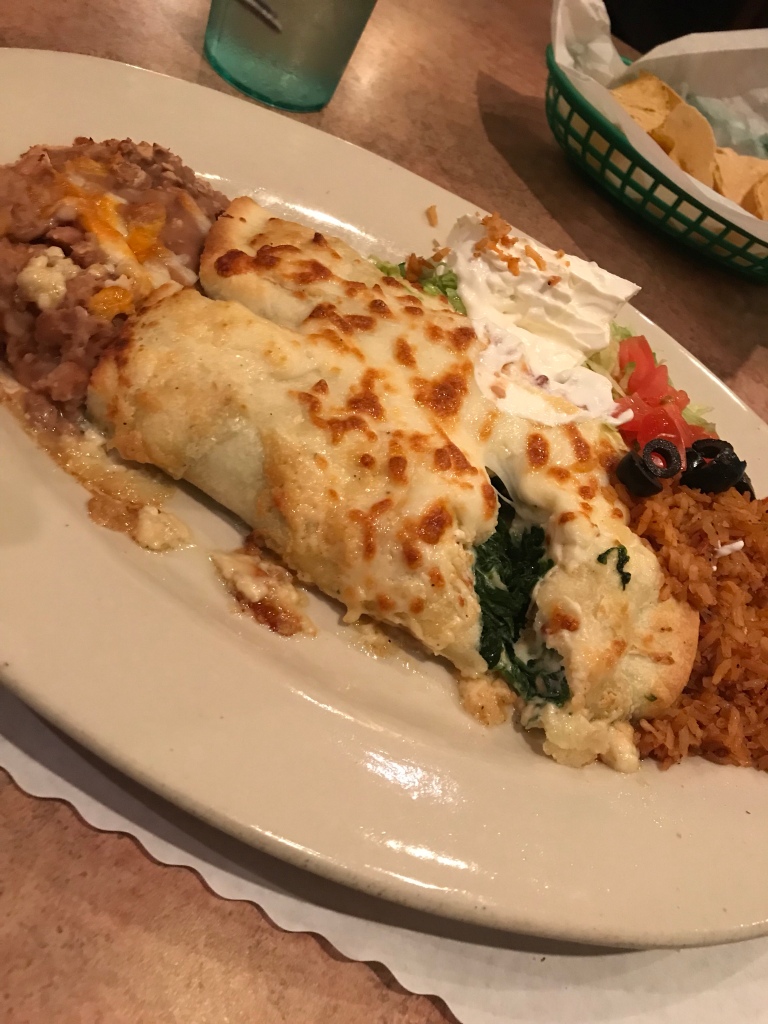 I had Spinach enchiladas with Alfredo sauce, it was soo good, but a ton of food.

We planned out our next couple days and hit the hay.

This has been such an amazing experience and we are so thankful to have the opportunity to do this. Every day we make more memories and have more stories to tell. 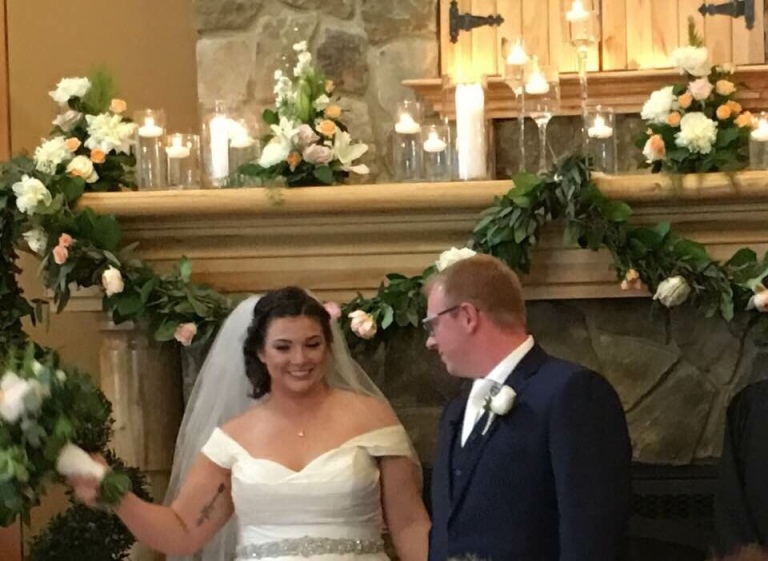 Living life with your best friend is indescribable.

We thank you for following along with us and hope you continue to do so the next few weeks.