Some solid miles logged today – starting off with a delicious breakfast and our last leg of Montana. Ending with some presidents carved into a rock and a switch up of sleeping arrangements.

Our hotel was attached to Stella’s Kitchen and Bakery – the complimentary breakfast was provided by the hotel at the diner and it was absolutely delicious.

We were expecting some small breakfast options but that was not the case. Chris chose the half order of sausage gravy and biscuits which did not seem like a half portion at all. They made their own bread so this sourdough toast was unreal. And a yogurt parfait to top it all off. It’s safe to say we were full until our next meal at about 4. 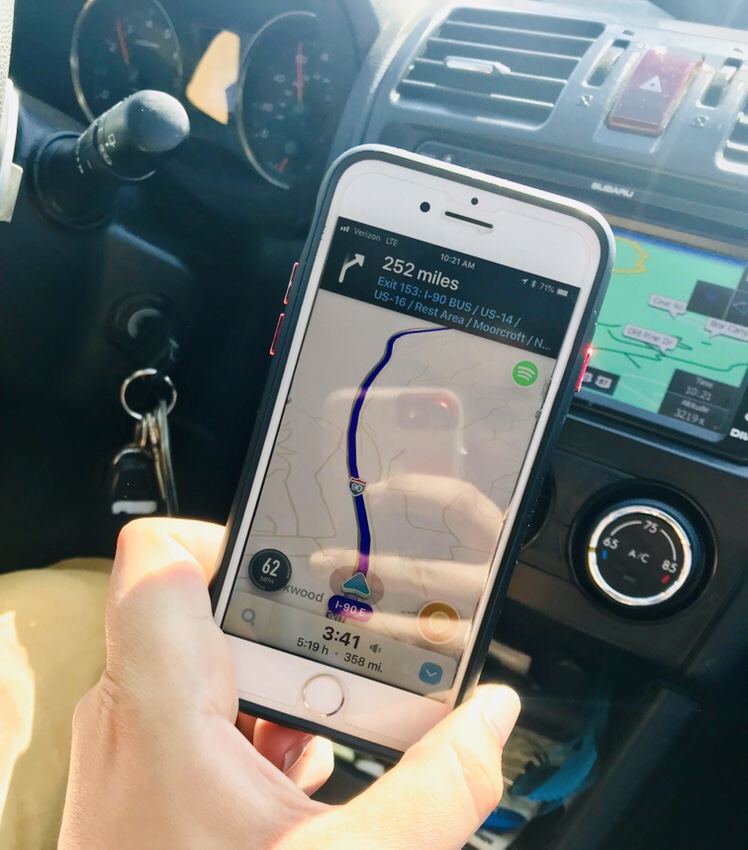 Christopher picked up the first 252 miles which was just this one stretch of highway.

A couple hours in we swapped and I drove the rest of the way. We stopped at probably the only rest stop in the area along with everyone and their mother. It was super busy, but just a quick bathroom break and driver switch and we were good to go.

There were a variety of views on our drive today from farmland to mountains and interesting buildings – livestock and wildlife including lots of pronghorn. 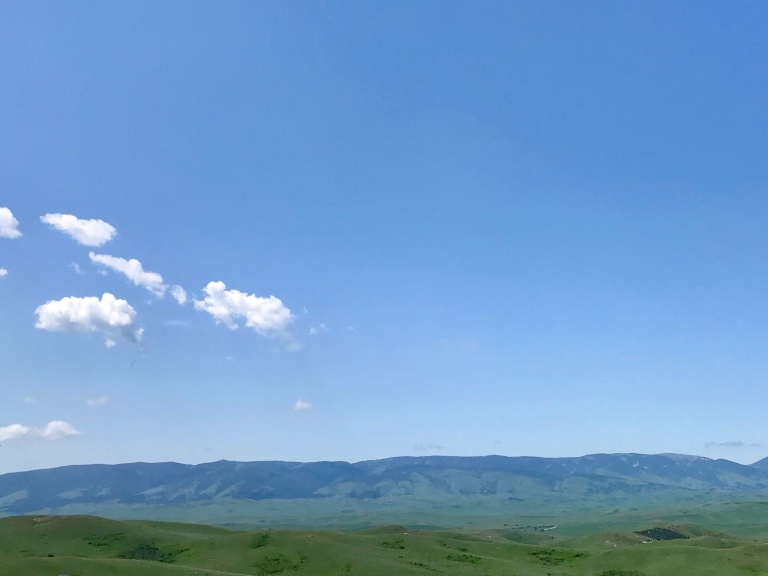 We hit up Mount Rushmore, because well it’s just one of those ‘must see’ American things. The drive in was nice, and we even saw the largest mountain carving, the Crazy Horse Memorial, which was carved into Crazy Horse Mountain. 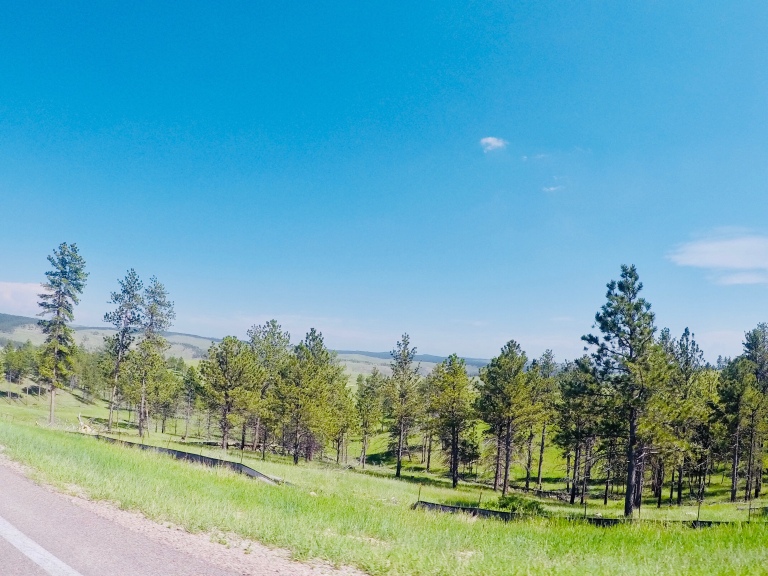 The route we took drive us through Black Hills National forest where we ran into some big horn sheep, but not the TRUE big horn male Chris was hoping for. 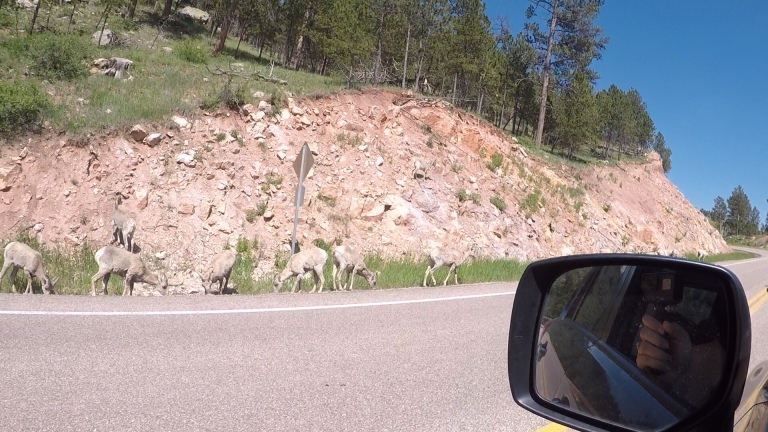 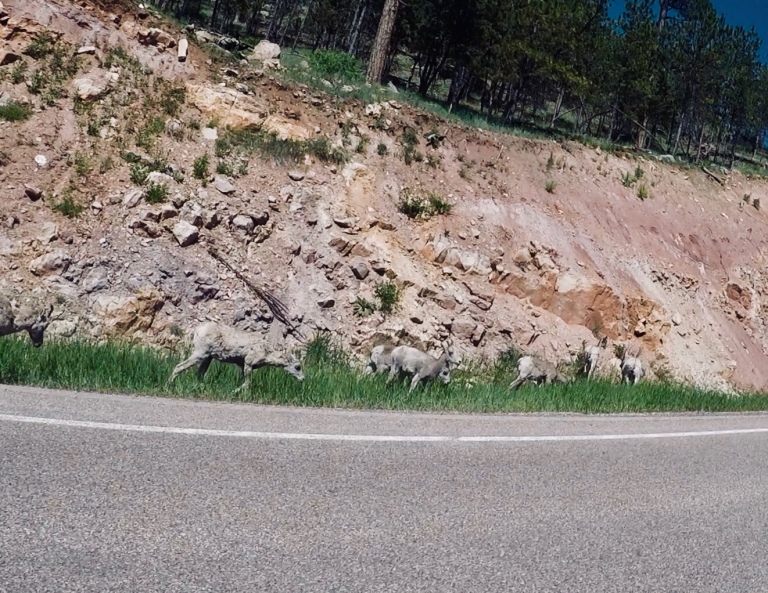 There isn’t much at all to do at Mount Rushmore but look at the monument. Everything is wicked overpriced (way more than your general store within a park). There is some history within the memorial area and a few ‘trails’ you can follow, but it’s mostly just looking at the memorial/monument taking a picture of your state flag, and heading on your way. 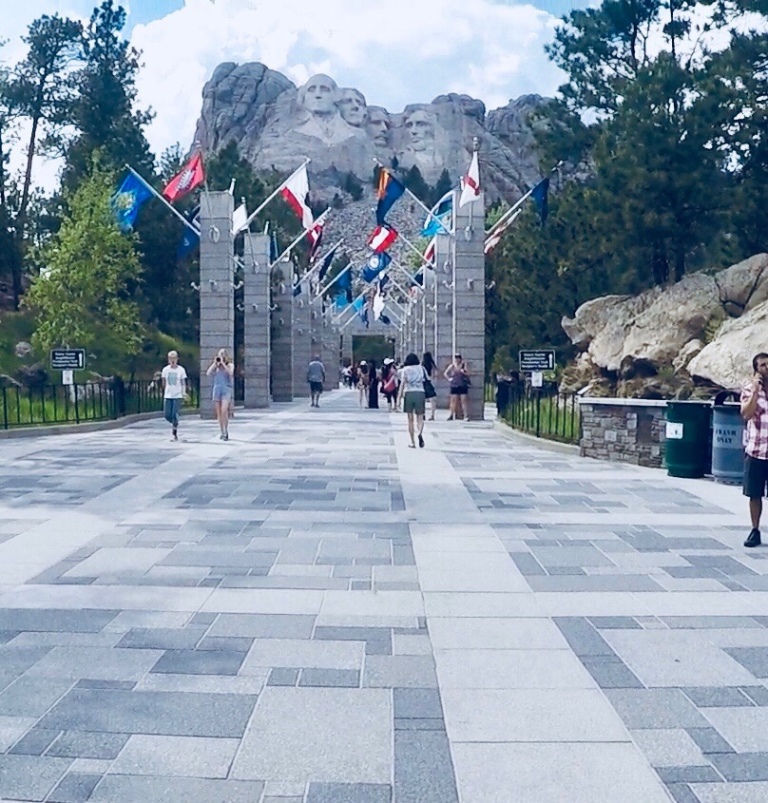 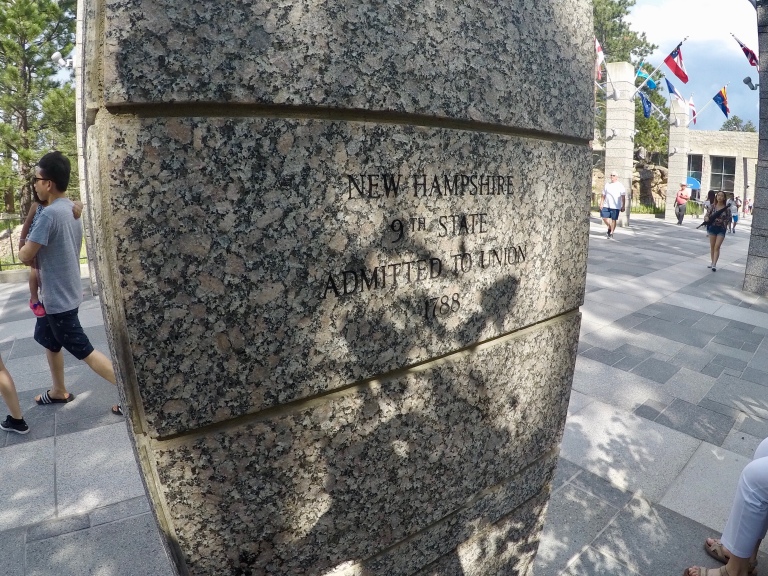 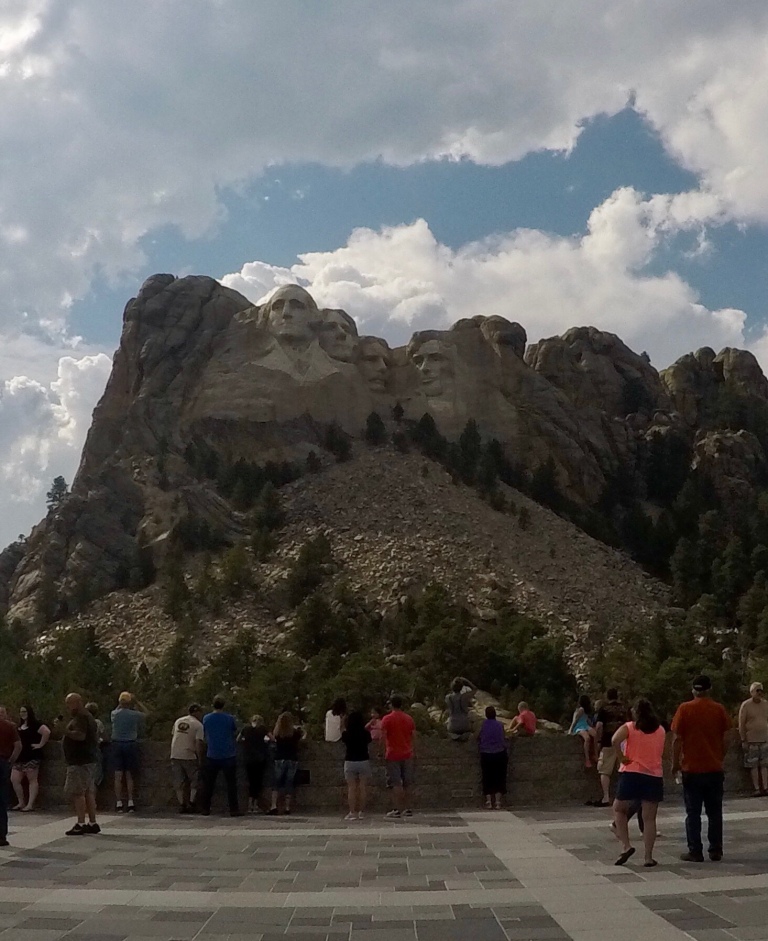 Well hey, we can check it off our list of things to do/see. So ✔️

We hadn’t eaten anything other than a Power Crunch Bar since breakfast so we stopped in at a local place. Red’s Chicken House and BBQ. pretty basic, but a great option for a quick delicious real meal. 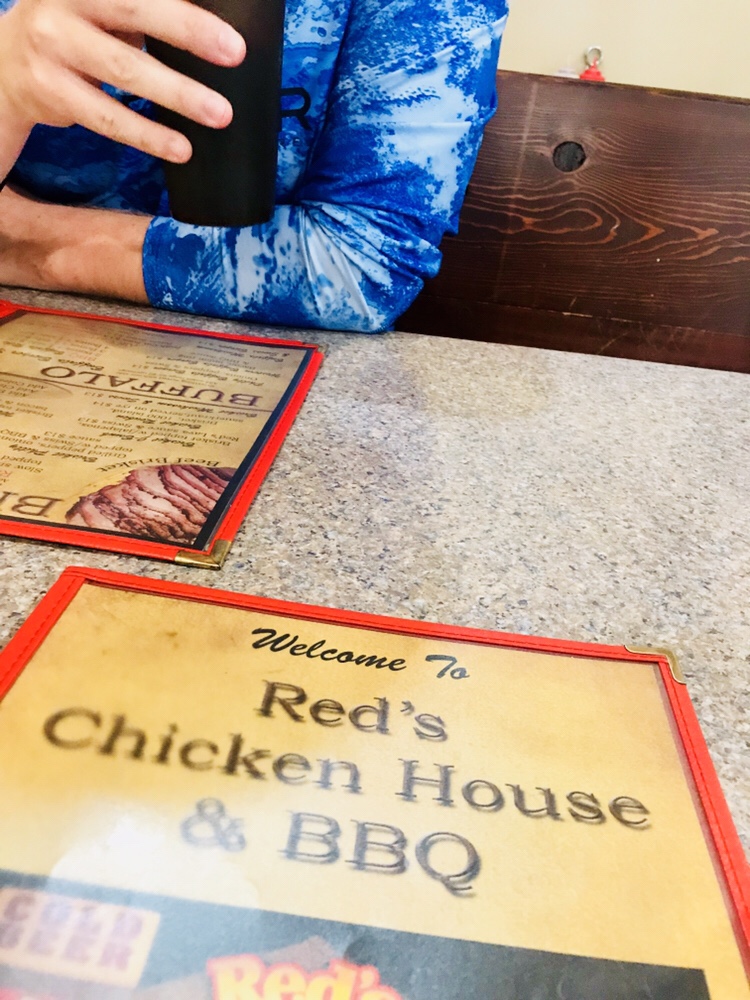 I finished of the last hour and 15 minuets of the drive to our resting point.

As we approached where we had booked our campsite for the night we watched a thunderstorm in the distance. The Gem loves weather systems and clouds so he was all about it. Things took a questionable turn when it turned out that storm was right over our campsite.

We were actually really bummed because we had booked a teepee and were looking forward to it, but when we got there they were all flooded and there was no way we could make it work. All the tent sites were also soaked. We upgraded for $15 to a cabin.

Y’all. I wouldn’t call this a cabin one bit. It’s literally a thing with 4 walls I could have built myself for only $15. We are kind of laughing it of and kind of still skeptical, but hey it’s an experience and maybe it’ll be one of those things we look back on and laugh about. 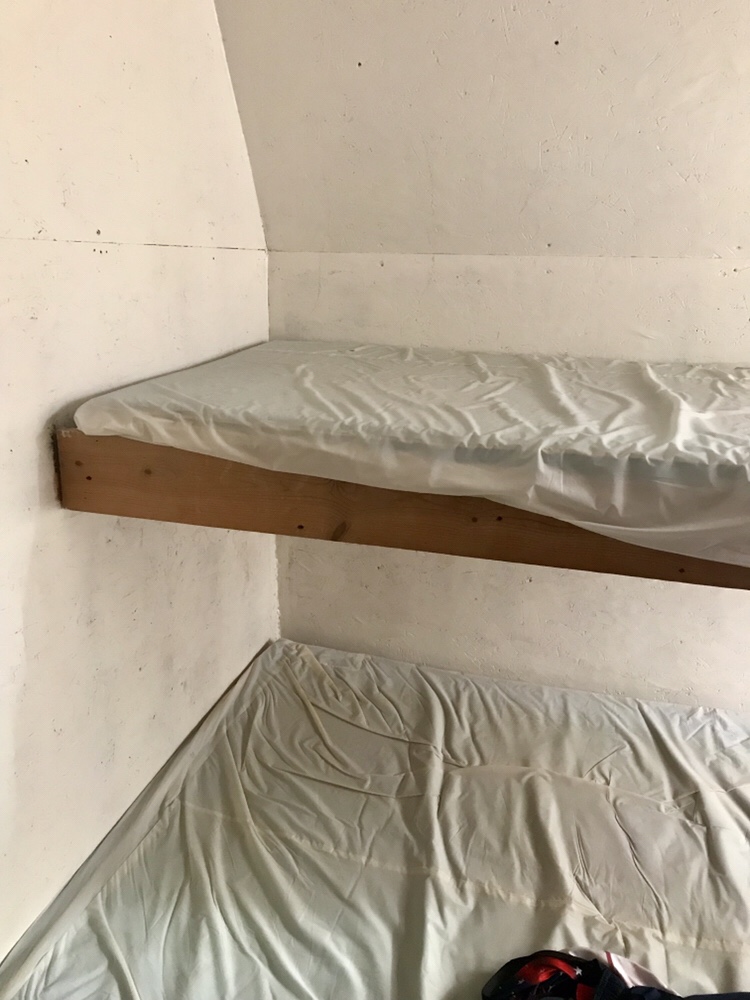 We are excited to experience the Badlands tomorrow though so stay tuned for a better day of pictures and experiences tomorrow.

The Gem did just get this awesome shot of the sky to cap off the night ..